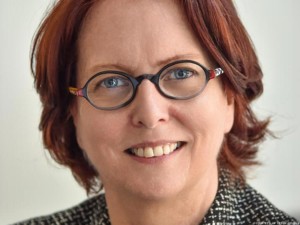 WASHINGTON, D.C.—Today, PFLAG National—the nation’s largest and oldest organization uniting families and allies with people who are lesbian, gay, bisexual, transgender and queer (LGBTQ)—named Jaime M. Grant, Ph. D. as its new Executive Director. Dr. Grant, a longtime social-justice leader and innovator, assumes leadership of an organization, founded in 1972, with over 200,000 members and supporters, and nearly 400 chapters nationwide.PFLAG National Board President Jean Hodges spoke for PFLAG board leaders: “As PFLAG enters its 45th anniversary year in 2018, we are thrilled to have Jaime’s strong and visionary leadership moving us forward. She has extensive experience as a thought leader in progressive movements, and formidable credentials as a researcher, author, and fundraiser.”

Hodges added, “Having Jaime at the helm signals PFLAG’s resolve to advance the fight for LGBTQ people and their families, who continue to struggle in this increasingly stressful and violent environment; and to educate, engage, and empower a new generation of allies, who are so crucial to this movement. She is a bold choice for PFLAG National, at the right time.”

Dr. Grant was named after an extensive national search by the PFLAG National Board of Directors, assisted by McCormack+Kristel, an executive search practice specializing in diversity recruitment. The PFLAG National board extends its thanks to Deputy Executive Director Elizabeth Kohm, who has served as Interim Executive Director since December 2016. Jaime Grant has been active in feminist and LGBTQ movements for three decades, serving previously as the Policy Institute Director at The National LGBTQ Task Force, and as Founding Executive Director of the Arcus Center for Social Justice Leadership at Kalamazoo College.  Recently, she was founder and director of the Global Trans Research and Advocacy Project, supporting transgender researchers and activists in the Global South. Grant has numerous books to her credit, including a co-author and principal investigator credit for Injustice at Every Turn: A Report of the National Transgender Discrimination Survey, co-published by the National Center for Transgender Equality and the National LGBTQ Task Force.

“I’ve been ‘in training’ for this job my whole life,” said Dr. Grant. “I survived an extremely painful coming-out process in my family—an estrangement that lasted over a decade.  And I am Mom to two wonderful children, including a proud bisexual son who ran his high-school GSA.  I believe so strongly in PFLAG and its work, which, over the past 45 years has created a tremendous cultural shift in parenting values, and fires up advocacy by families and allies. I am honored and thrilled to accept this position.”

“PFLAG has made an exciting choice in Jaime Grant as their next executive director. She brings her brilliance, her fundraising abilities and her vision to the role. Throughout her life, Jaime has demonstrated the true meaning of family and community. I look forward to working with her!”

“These are tough times for so many in our communities facing extreme hate speech and tactics. Having worked so closely with Jaime Grant, I know her radically inclusive and visionary leadership will ensure transformation happens family by family.  Guided by this leadership, the love, support and advocacy that PFLAG offers will make a real difference, particularly for trans and queer people of color.”

“As someone deeply immersed with families and schools working to support children whose gender identities span the continuum, I am thrilled to know Jaime Grant has been named to lead PFLAG.  Her understanding of intersectionality is needed today more than ever. The complex ways youth define and embrace their gender, racial, and sexual identities makes it hard for society to keep up. Jaime Grant is the ideal person today to lead PFLAG in bridging this generational paradigm shift.”

“Jaime Grant is an exceptional leader for PFLAG National. Her groundbreaking 2011 work on the report Injustice at Every Turn: Transgender Inequality in America along with NCTE and the National LGBTQ Task Force highlights the power of collaboration Dr. Grant brings to her work every day. The report highlights clearly that family support is a key indicator for successful transition for so many trans and gender-nonconforming youth. I am thrilled that Dr. Grant will lead PFLAG’s efforts to support families and the LGBTQI community in the years ahead.”