As time has passed, acceptance for the LGBTQ+ community had begun to take a journey into new areas of sexuality and gender expression that have never been explored by mainstream American society. The Stonewall Riots, in 1969 changed the course for that community to bring awareness, acceptance, and recognition as an individual community that was deserving of its own set of rights. With the civil rights movement for African-Americans and the women’s liberation movement, it was time for the LGBTQ+ community to “come out of the closet.”

In 1978, Gilbert Baker designed a flag to represent the diversity within the gay community. The original flag consisted of eight stripes: pink, red, orange, yellow, green, blue, indigo, and violet. Later, the colors pink and indigo were removed and what was left was the flag we know to this day. Most people do not even understand the meaning of the gay pride rainbow flag, nor do they know the significance. The flag was created to represent a symbol of pride, a symbol of hope and a symbol of diversity. Red is meant to represent life; orange means healing, yellow means sunlight (out in the open and not hidden in the shadows), green means nature, blue means serenity and violet are meant for spirit.

Before the Stonewall Riots, gays and lesbians were kept in the closet and not to be spoken about. Although there were some representations in early film, they were filled with stereotypes of how a gay man or lesbian should act. “The sissy” was the first character that could be openly represented on film, although for comedic purposes and to be looked at scornfully. He was the man who performed traditional female acts, and he would act in an effeminate way to let the audience know that he was gay without it being openly said. The very characteristic could even be seen in cartoon shorts, such as Bugs Bunny, where Bugs would dress or act femininely to woo or trick his enemies.

After the Stonewall Riots and the gay movement, there became more visibility and exposure to the full spectrum of the entire community. In the earlier days, there was gay/lesbian, bisexual, cross-dresser or transvestite to symbolize the entire community. As the AIDS epidemic of the 1980s came to light, many people were inadvertently outed or decided to go public with their sexuality. The death of the old film actor, Rock Hudson, brought a face of AIDS to Hollywood. His long-time friend, Elizabeth Taylor, made it her mission to find a cure for AIDS. The public wearing of red ribbons could be seen everywhere in the late 80s in support of the fight against AIDS, and society began to see the gay community with more compassion and empathy. 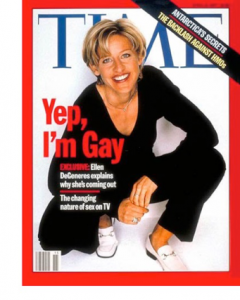 Throughout the 90s and beyond, we started to see more gay characters visible on TV and film. They wouldn’t be the main character, nor would they fully be represented as a three-dimensional character. It was as if being gay was their only defining characteristic. Then came Ellen. Ellen DeGeneres had a TV series called Ellen, before her current talk show. In the series, it began with Ellen and her group of friends working, hanging out, dating, etc. and she was portrayed as a straight woman. In real life, we now know Ellen is a lesbian, but it was not public at the time. Several seasons into her popular series she decided to create a story arc to which her character (the main character of the show) realized that she’s a lesbian. News of the plot change broke, and not before long Ellen DeGeneres came out publicly in real life stating she was a lesbian. She decided to make her character come out as a lesbian so that people could see the journey of knowing someone they knew as straight the whole time, but now they needed to learn to cope and understand the fact that their friend is a lesbian.

The show did not last long after that character revelation, but the groundbreaking movement allowed for gay and lesbian characters to start popping up all over TV and film. They were no longer for comedic purposes, they were not one-dimensional, and they were not just a secondary or supporting character. Will & Grace became one of the most popular TV shows of the early 2000s with the male lead character being a gay man. We began to see movies with A-list actors portraying gay characters in movies, such as Tom Hanks in “Philadelphia.” Drag Queen acts popped up with “To Wong Foo, Thanks For Everything! July Newmar” and “Priscilla, Queen of the Desert” giving exposure to another facet to the expanding community. Then “Boys Don’t Cry” and “Brokeback Mountain” became Academy Award-nominated and won films; showing the true story of a trans man who is murdered when it’s discovered that he’s female and a cowboy love story between the two male leads.

With many of these characters visible to the public, soon afterward many of the actors and actresses behind the roles came out publicly. This was to show that not only can straight actors portray gay characters, but that gay actors can also still play a straight character. Recognition became mainstream and the more exposure there was, the wider the rainbow became. New stripes and flags were created to show pride for other pieces of the original flag that weren’t originally spoken about. The transgender community was originally presented to society as someone wearing the opposite gender’s clothing until more people publicly spoke about what their lives were really like. People like Chaz Bono, Laverne Cox, and Katelyn Jenner put faces to the transgender community. Chaz Bono and Katelyn Jenner, in particular, showed the public what the journey is like going from one gender to another since they were both known before their transition. 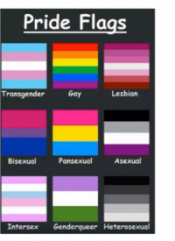 What started as gay or lesbian, soon began to add more and more to their spectrum with bisexual, transgender, asexual, queer, pansexual, intersexual, gender neutral, and many others that are being added. LGB has quickly become LGBT, to LGBTQ, and has gotten so large we just add the + at the end to include everyone under the rainbow. The 5-colored gay pride rainbow flag has been modified to specify each category of inclusion. But as more and more of the LGBTQ+ community become visible and are equally represented in movies, TV, books and other media; the umbrella opens up larger to cover everyone underneath it that it represents. We are a growing community, and there is a lot more to our community than a bunch of letters and colors

About the Author: Richard Stiso